There’s something very peaceful about snow. Snow causes all sorts of problems, of course, but it is in fact these problems from which the peacefulness of snow arises. Snow is peaceful precisely because it causes most creatures to go home. But it does more; since it takes footprints so readily, snow also proves when it has kept men away from a place: 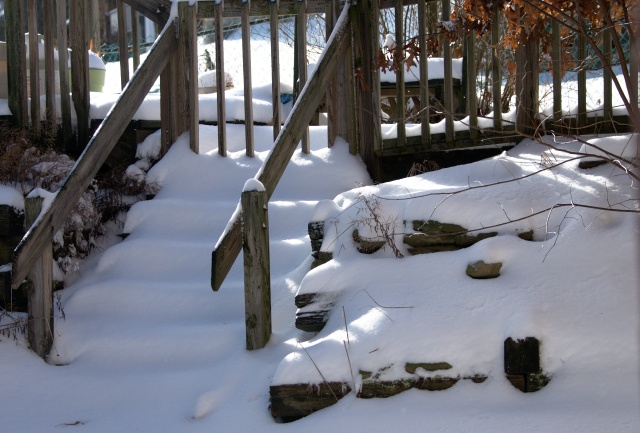 Isolation is not the best kind of peace, of course. Peace, most properly considered, is the ordering of creation according to God’s will. Among human beings, peace refers to harmony, not merely to the cessation of fighting. But in a fallen world one must often accept second-bests, and snow gives us a respite from many of the troubles which burden us in a fallen world.

It is interesting to consider that rain also drives men indoors and away from causing mischief, but rain is not peaceful. It seems to me that this different comes from three differences between rain and snow. The first is that rain is loud. Snow is not only quiet but even muffles sound, a bit. Snow gives one quiet in which to think.

The second difference is that human beings, in our natural state, are rain-proof but are not snow-proof. Except in very cold weather—which is not our predominant experience of rain—going out in the rain will make one wet but do one no harm. This is actually most inconvenient when one is wearing clothes (which is, admittedly, almost all the time). Snow will kill a naked man. Rain is only really a problem because we wear clothing, and then it’s really on uncomfortable. Our retreat from snow is, therefore, more dignified.

The third reason is that snow is less dangerous to us when we have shelter. Rain is just an inconvenience until one gets too much of it, in which case it causes floods which are extremely destructive and deadly even when we have shelter. And while these are unusual circumstances, they’re not unheard of. In the places where people have floods, floods happen every few years, if not more often. In the places that get snow, enough snow to collapse buildings is very rare. Water moves and combines its power but snow mostly falls where it lands. That’s not true of mountains where avalanches happen, of course, but I imagine that snow isn’t nearly as peaceful there.

But in more ordinary places, snow only keeps men indoors where they give each other little trouble, and so it’s deep snowfall is very peaceful.

2 thoughts on “Snow is Peaceful”