I was recently watching the Mystery Science Theater 3000 episode featuring the movie The Sinister Urge, and then I watched Plan 9 From Outer Space with the Mike Nelson commentary. Out of curiosity, I looked it up the cast, because one of the major villains in Sinister Urge was a good guy in Plan 9. His name was Carl Anthony. Here’s a picture of him: 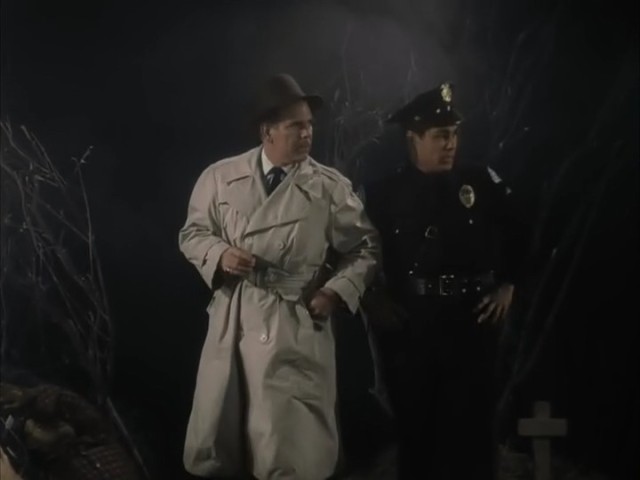 He’s the one in the police uniform. Here’s another picture of him. 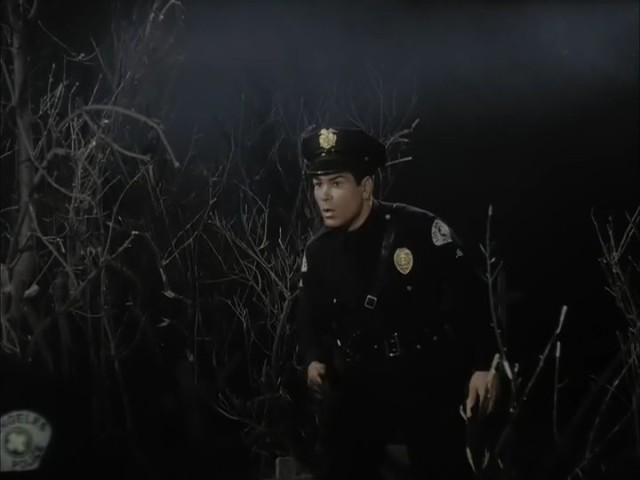 Two things caught my attention. The first was that after some initial success, it was 22 years before he got another part. It’s not much of a movie, but it is a real movie. The IMDB synopsis for Raw Force is:

A group of martial arts students are en route to an island that supposedly is home to the ghosts of martial artists who have lost their honor. A Hitler lookalike and his gang are running a female slavery operation on the island as well. Soon, the two groups meet and all sorts of crazy things happen which include cannibal monks, piranhas, zombies, and more!

The second thing I noticed was that there was a TV show called Grand Jury. Carl Anthony was in the episode called Boxing Scandal. The Wikipedia page has next to no information beside an episode list. Yet there are writers for each episode, and it has actors, so presumably it was some sort of crime drama or detective show about a grand jury. I’m very curious what their premise was since grand juries don’t have continuity. They’re assembled for a few weeks, hear a bunch of cases, determine whether there is sufficient evidence to proceed to trial, then disband. Their goal is not to determine guilt or innocence, which would make it a very odd fit for a detective series.

Then it occurred to me to check to see whether there are any episodes on YouTube. Luck! There is:

It’s curious, to be sure. After a bit more research I discovered that Grand Juries actually do have investigative functions, such as the ability to compel witnesses to testify. The basic format is that some people committed a crime, then the grand jury investigates and tries to catch them. It’s actually a bit reminiscent of Columbo, in the sense of being a how-catch-em rather than a who-dunnit. That said, at least the episode Fire Trap is really more about the tragedy of how crooks fall apart than about investigations by the grand jury.

The acting was decent. The writing was… adequate. Really, it was kind of minimal. It wasn’t subtle, to be sure. To some degree it actually felt like a morality play—somebody made the choice to do a wicked deed and his life fell apart because of it. Of course, I have no way of knowing whether this was a typical episode. Still, I can see why this was not one of the great TV shows which is still remembered. That might be why Carl Anthony got a part in it (this was after Plan 9 but before The Sinister Urge).

This ties in to my earlier post, Most of Life is Unknown. People worked on this show and—presumably—people watched it. Most of them are probably dead by now, and the show is barely known. The wikipedia page which gives its list of episodes is presumably copied from somewhere since most of the entries are TBA. Even the things which we think should last disappear quite quickly from human memory. Fame promises so much and delivers so very little.

It’s a good thing that God is in charge of the world, or we’d be really screwed.